Andy had warned me about this week’s Makeover Monday. 2 fields. 4 values.
I didn’t remember his warning until I opened the .tde this morning and there it was:

I had a look at the original visualisation which is an infographic by visualcapitalist.com

I am usually quite partial to infographics and I think this one has a few good elements.

But there are a few things I would do differently and that just don’t work for me here.

So I wanted to simplify this topic. It isn’t easy. Simplification can be really difficult. But here is what I came up with. 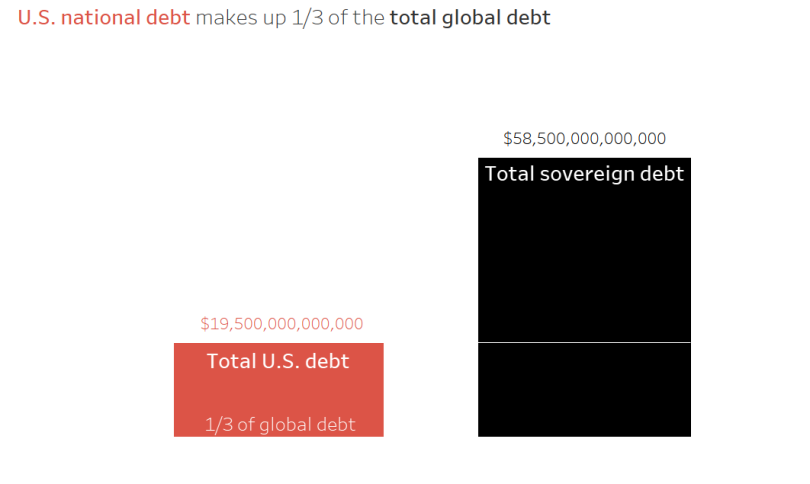 In the end I decided to keep it very simple, because there are only two records in the dataset. Despite my earlier criticism of the magnitude of the numbers, I decided to keep them in their original state, because breaking them down into a smaller unit would require additional explanations, which wouldn’t help with simplicity.

Colour-wise I decided on Black for the total global debt and Red(ish) for the US, because I like the contrast it creates with the black.

I also added a kind of reference line on the total debt chart to indicate how high the US debt reaches. By specifying that US debt is 1/3 of global debt I aimed to provide an easy reference point, because most people can imagine a third of something.

I had thought of adding some provocative statements, but decided against it. I’m no politician, finance expert or journalist. I just want to visualise the facts. What people think of it, is up to them.