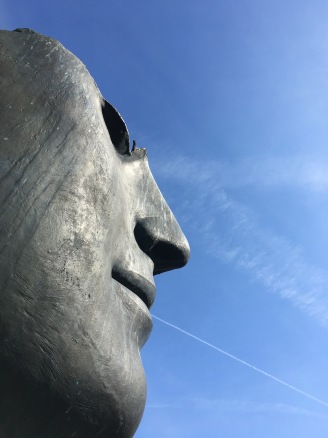 Heading towards the end of March and having well and truly arrived in spring, our northern Bavarian region of Franconia put on a cracker of a day yesterday. There were endless blue skies, sunshine and temperatures of 17 degrees Celsius (63 F). What a treat!

It was also the day for my first 10km running race in almost 7 years. Yes, that’s right, I haven’t done many running races over the past few years and when I did, they were always well below 10km.

in 2010, Paul and I ran the Rotorua 10km race in memory of his dad who passed away earlier that year. It was a tough run and we finished with exactly the same time of 52:33.

After last week’s new personal best of 48:47 over 10km thanks to some excellent pacing by Andy being my London running buddy and tour guide, my new goal was to beat that time in yesterday’s race.

Paul decided yesterday morning to also run the race, but we decided not to race each other (errrrmmm, yeah).

I agreed with my coach to aim for a sub 48min result and to go for negative splits with keeping the first 5km at around 4:45min/km pace and then speeding things up for the second half of the race.
For this purpose I changed the setup of my watch. Unfortunately there is no pace alert, but I made sure time, pace and distance were prominently displayed and got rid of the heart rate field – this is a race, it’ll get messy…

So we got to the race, picked up our start numbers, did a little warm up jog and some dynamic stretches before lining up at the start with a few hundred other eager runners. The field, especially the men, looked very competitive. There were 495 starters, 143 women and 352 men men.

My goal of not starting out too fast was hard to stick to, because you get so caught up in the enthusiasm and are trying to find your spot and the right pace, but after the first kilometer I settled into a good rhythm. Paul passed me a couple of km into the race and was always within 50m ahead of me, so I could keep my eye on him.

The race was 2 laps of 5km across trails in the forest with the ground being dry, firm and packed but still comfortable to run on. The trees kept it shady for most of the course, which given the warmish temperatures was much appreciated.

I settled into a good rhythm and kept my pace around 4:45, slowing down on the uphills and letting the legs fly a little on every descend. My pink socks stood out and that’s a good thing. When I used to dance back in New Zealand, my dance teacher always told me that having shoes that stand out means you better know your steps and execute them well. In running I feel that being visible makes me faster because there’s that added pressure of being ‘the girl with the pink socks’.

On the second lap I kept with the same group of guys who were all running at around the same pace as me. During kilometer 7 I passed Paul and started to drop a few others as well. I knew that the last couple of kilometers would be mostly downhill and I wanted to surge then to finish strong. I also realised around that time that I could reach a sub 46min time if I ran smart and kept up the pace.

As soon as the downhill started, I kicked it up a little but with just under 2km to go I needed to ensure I had enough in the tank to finish strong. With 1km to go I let go of any more hesitation and just focus on breathing in sync with my higher cadence, moved my sunglasses from my eyes to the top of my visor (for that finishing photo, of course!), started to push harder with my arms and keep them nice and straight to keep my torso aligned and not swinging side to side. All about maximum efficiency now.

I dropped a few more people, passed a couple, left the forest for the last 500m to the finish chute. I saw a woman ahead of me and tried to catch her but I left it too late.

I ran across the finish line, and paused my Garmin to get my bib scanned by a volunteer. The problem was that my Garmin was at 9.88km and without those extra 120 meters I wouldn’t get a new PB on Strava, so I exited the chute, pressed start and sprinted for the last few seconds to reach 10km on my watch and snatch that new PB.

I was absolutely stoked to crush my sub 48min target by a significant amount and to go from 48:47 to 45:43 (using the Garmin recorded time) in a matter of 10 days.

Paul finished in 46:12 (official time) which he was pleased with after beating his previous 10km best of 47min. I’m still much more excited about my new PB than about beating him in the race. I do have the benefit of having put almost 15,000km of riding and 225km of running into my legs over the last 2 1/2 years, which is quite a head start compared to his rather recent ventures into the sport of triathlon, and I told him to keep that in mind. All the endurance and strength – both physically and mentally – that I have built up help me in every race, especially the longer ones. So I hope he is still happy with his result.

My result earned me a seconed place in my age group. The girl 3 seconds ahead of me won our age group – which does make me somewhat frustrated because had I started my final surge 200m earlier, I could have caught her and gotten the win. Finishing second is okay though because my only target was the time. Finishing 9th woman overall out of 143 is also pretty decent. Especially because running isn’t really my strong discipline anyway.

But I think I may have gotten a taste of what’s possible and I am already planning the next 10km race :-).

Until then I shall leave you with a viz of yesterday’s run… (and yes, it’s the same colour as my socks. Because I can 🙂 )