This week I decided to use data we created ourselves. Andy and I both had a race on Sunday and after 9 months of Makeover Monday, I figured it was time for a bit of self-indulgence, so I challenged the community to work with our race results.

While Andy raced the Richmond Marathon more as a long training run in his lead up to Frankfurt (not quite sticking to the original plan I believe… 😉 ) for me it was actually the main race of my year: Age Group Sprint Triathlon World Championships.

This means I got to race the best amateurs from my age group from across the world who made their way to Rotterdam for the ultimate show-down. And don’t be mistaken, these ladies might be amateurs, but they are crazy fast.

I had an absolute blast out there, because not only did we have nothing but sunshine all day after a scary forecast and an even scarier and miserably wet and windy day on Saturday, but I also got to enjoy a very technical but scenic and fun bike course, a beautiful run in the park and an atmosphere that reminded me more of a party than a world championship race.

The friendliness and camaraderie between the girls was great and we were dancing, jumping and high-five-ing each other before the start.

The swim was in a sheltered area of the harbour with a few waves. They don’t bother me and I’m glad I have done plenty of ocean swimming in Sydney to be comfortable with a bit of a swell. What did bother me was the water temperature of around 16.5C, which was fine in a wetsuit but still gave me a brain freeze for the entire 14min (lesson here: swim faster and double cap it!).

Transition 1 was a ridiculous 900m section: 500m from swim exit to the bike area, then to the bike and out to the mount line. At least I had plenty of time to get out of that wetsuit, which was made easier by my new 2XU long-sleeved compression top which I wore against the cold.

The bike course was, like I said, very technical with lots of turns as can be seen in this video:

I didn’t catch a group to work with so I did most of the work by myself but I put everything into it and my legs were burning. I loved it!!!

Transition 2 wasn’t too long but the path was a bit narrow and I had a Mexican and a Dutch girl block my way as they decided to run in the middle of the path with their bikes. I managed to get around them, rack my bike and get into my shoes very quickly. Body glide on my feet definitely helped!

Out on the run and I had covered quite a bit of distance of this race, but the hardest part was now: Running on tired legs and not slowing down, while leaving enough in the tank for an epic sprint finish across the finish line.

Somehow on kilometer 2 when I slowed down after the initial adrenaline wore off, Elvis showed up, and this guy in his dress up and with his quirky comments and encouraging songs actually helped me push that little bit further, all while smiling.

I had to let a couple of girls go past because one of them was moaning really loudly but in a rhythm that threw me off my breathing rhythm – and I didn’t want to get cramps, so I needed to focus on my own breathing and not be distracted by her noise. Super annoying. Once peace and quiet settled in, I could go back to two breaths in, one breath out.

Near the end of the park, with 1km to go, I decided to step it up a notch and drop another couple of competitors. Finally the finish area came into sight and with it a hairpin turn in which I was given a German flag by one of our team members. And then I was off, racing like a maniac down the blue carpet, knowing there was an Australian girl behind me but not how close she was and I wasn’t going to let her catch me and steal my glory on those last few meters.

Across the line I got my medal. I always have to hold on to the volunteers, because otherwise I’d probably collapse in an uncoordinated heap of arms and legs.

All done. So let’s focus on the viz.

The original comes from Strava (for Andy) and from Garmin Connect (for me). I chose Garmin Connect because it actually has a triathlon setting and visualizes the whole race, while Strava gives me five individual activities…

So here it is: 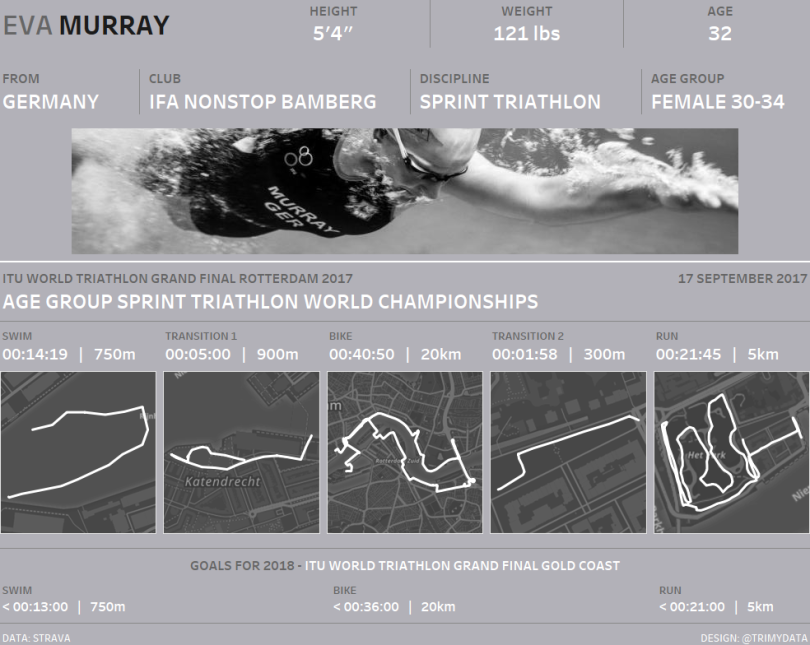